The Human Centipede (First Sequence) and Tusk (2014) are the same goddamn movie, except that Human Centipede is an inspired (but painfully fucked up) horror movie, and Tusk is directed by Kevin Smith so it is a cinematic dung heap. LET’S TALK ABOUT THEM. Here is why they are the same fucking movie:

I really dig this narrative arc, it’s like Joseph Campbell’s monomyth as interpreted by a fucking mental patient. “GUYS WHAT IF THE HERO’S SUPREME ORDEAL IS ABOUT HAVING HIS NECK SURGICALLY EXTENDED TO RESEMBLE A GIRAFFE’S?” And George Lucas was in fucking film school with this dumb idiot and he leans over to Spielberg and he whispers like, “I just want to make fun space stories.” And fucking Spielberg goes, “You know, he might have something if the Giraffe Person is just an ordinary Giraffe Person destined for something greater.” And then George Lucas has a fucking EUREKA MOMENT and comes up with a Jedi named G’raff P’rrson WHO IS WISE IN THE WAYS OF THE FORCE AND ALSO HAS A SIX-FOOT NECK. 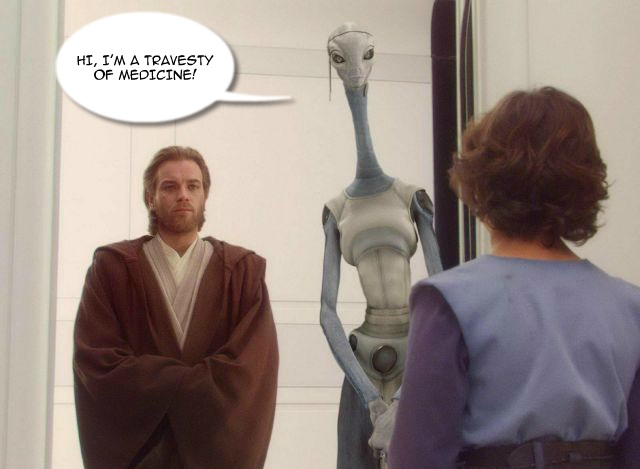 THAT REALLY HAPPENED I HEARD IT IN AN INTERVIEW ONCE. Anyway, let’s start with Human Centipede. Super fun movie. The Human Centipede (First Sequence), as directed by Tom Six (totally his REAL NAME LOL), was a meme before there were memes. It came out way, way back in 2009, long before Scumbag Steve and Good Guy Greg were hanging out on Reddit giving karma to Foul Bachelor Frog’s upvotes. (Actually I have no fucking idea if this is true but 2009 does feel like a long fucking time ago AND I DON’T HAVE THE FUCKING PATIENCE TO RESEARCH THE HISTORY OF SCUMBAG STEVE.) Just roll with me, okay? I AM MAKING A FUCKING POINT. The point is that “The Human Centipede” (as a concept) was internalized and understood by audiences way before “The Human Centipede” (as a movie) even came out. IT WAS AN INSTANT INTERNET PUNCHLINE. That is because the concept was fucking OUT THERE. It was so gross that it was OUT THERE while also being FUCKING HILARIOUS. It was, “OMG some guy made a movie about surgically connecting three people A2M. THAT IS FUCKING DISGUSTING LOL HAVE AN UPVOTE.” What we actually have here is GENIUS MARKETING. The hilarious/gross nature of the high concept — combined with director Six’s assertion that the film was “100% medically accurate” — was undeniable cinematic catnip. PEOPLE WANTED TO SEE THIS FUCKING MOVIE.

And yet, in a way, the marketing may have been — dare I say it — TOO FUCKING GOOD? Meaning that due to the already high awareness level of the film, MANY PEOPLE FELT LIKE THEY HAD ALREADY SEEN THE GODDAMN MOVIE. Granted, this may have been a convenient way of getting out of ACTUALLY HAVING TO FUCKING WATCH a movie about three people who are surgically connected A2M. I mean, only the fucking depraved masses would VOLUNTEER for that kind of experience, right? HERE ARE THE CONVERSATIONS THAT WERE NOT HAPPENING IN LIVING ROOMS ON AN ORDINARY SATURDAY NIGHT IN 2009:

Oh look here’s a movie with Sandra Bullock having a fun time in couples counseling with James Gandolfini. That sounds goofy! Who’s up for it?

I want to watch the latest Pixar movie about aliens!

What about the one about three people being surgically connected A2M* by a homicidal lunatic?

*According to Wikipedia, A2M may refer to “Alpha-2-Macroglobulin” (a gene with the ability to inhibit all four classes of proteinases by a unique “trapping” mechanism) or “Ass to Mouth” (pulling your dick out of a girl’s ass and shoving it in her mouth). YOU FIGURE OUT WHAT IT MEANS.

Conclusion: before Human Centipede came out, audiences were already divided into two camps. Those who were too-grossed-out-by/felt-like-they-had-already-seen the movie, and those who JUST HAD TO SEE A MOVIE ABOUT A HUMAN FUCKING CENTIPEDE. “Chick, which camp were you in?” you might be asking. HAVE A GUESS, MOTHERFUCKER. I was in junior high. I WAS GOING TO SEE THE HUMAN FUCKING CENTIPEDE. Unfortunately for Tom Six and the rest of America, most people were in the former camp. CAN YOU BLAME THEM? Only boys in junior high (and perverts) were going to see this movie. It was a BADGE OF HONOR to see Human Centipede. It was like going on the scariest fucking roller coaster or eating one of those old candies on Grandma’s coffee table. IT WAS THE KIND OF SHIT YOU DO ON A DARE. “Dude, did you hear? Chick saw THE HUMAN CENTIPEDE. Fucking rad, dude!” High fives for everyone and then Chick got blown by all the cheerleaders END OF SCENE.

But now it is time to savor the fucking irony: The Human Centipede (First Sequence) is much, much tamer than its scenario would suggest. LISTEN I’M NOT SAYING THAT IT’S THE “MONICA AND RACHEL AND JOEY GET SURGERY” EPISODE OF FRIENDS. The movie is still PLENTY fucked up, okay? But if you are hoping for the sordid voyeurism of a typical slasher flick a la Hostel, you will probably be disappointed. Because despite its bloody premise, Human Centipede is surprisingly light on gore and depicts its grossest moments either off-screen or through the power of narrative suggestion. I HAVE TO TIP MY FUCKING HAT TO TOM SIX ON THIS ONE, PEOPLE. He seriously made me think I was going to see one thing, then totally delivered something else entirely. It is a CLASSIC MISDIRECT and it is fucking brilliant.

Shit, I have not even gotten to Tusk yet. Let me wrap up Human Centipede for you: HUMAN CENTIPEDE IS THE THINKING MAN’S A2M MOVIE. It is a creepy, scary, disgusting little film with a very creepy, scary and disgusting performance at its core from German actor Dieter Laser, who plays the terrifying and deranged surgeon Dr. Heiter OH OF COURSE HE IS GERMAN. The NAADGS (National Association for the Advancement of Deranged German Surgeons) HAD A FUCKING FIELD DAY WITH THIS MOVIE. Human Centipede obliterates decades of work from that incredible organization! OMG IT’S LIKE MARATHON MAN REDUX TOO SOON. When one of the doctor’s victims (SPOILER ALERT) tries to escape, a demented cat-and-mouse chase results that is so suspenseful and nail-biting THAT I BIT ALL MY FUCKING NAILS OFF AND THEN PEED ON THEM. Jesus I don’t want to keep saying the same fucking shit and it seems like I’m dancing around the point BECAUSE MAYBE I AM but fuck it because (oh God here it comes) THE HUMAN CENTIPEDE IS MAYBE A GOOD MOVIE. It is certainly way, way smarter than you ever thought a movie about surgically connecting three people A2M would be LIKE THAT’S A FUCKING SUB-GENRE NOW. 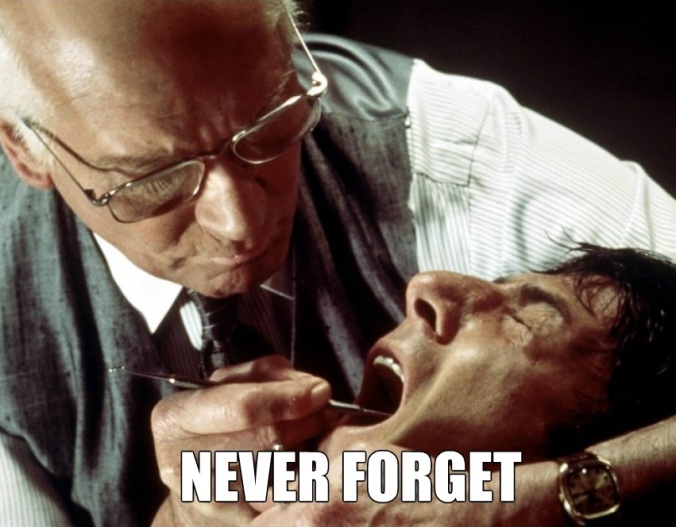 This message brought to you by NAADGS.

MOVING ON! Clarification: the sub-genre is DERANGED SURGERY MOVIES and Kevin Smith’s Tusk is definitely one of those. Tusk also happens to make Human Centipede look like The Good German. TIP: you might have a problem with your deranged surgery movie if your deranged surgery movie makes Human Centipede look like the smart kid in class. Because Tusk is not smart NO SIR. Tusk is very, very stupid. It’s like Tusk was something Kevin Smith came up with on his podcast as a joke and then actually made into a movie as a result of a fucking Twitter campaign OH WAIT IT WAS.

OH MY FUCKING JESUS FUCK KEVIN SMITH AND FUCK THIS MOVIE. This sounds like I have a hate on for Kevin Smith, I really don’t. The movie he made before Tusk, called Red State (2011), is actually pretty good. Like Human Centipede, it is SURPRISINGLY FUCKING GOOD. It might actually be the only good movie that Kevin Smith has ever fucking made. KEVIN SMITH CLEARLY HAS IMPULSE CONTROL ISSUES. Every idea that you come up with WHEN YOU ARE FUCKING STONED ON YOUR IDIOT PODCAST (side note: fuck podcasts) does not need to become a feature fucking film. Certainly not a shitty version of Human Centipede starring “Mac Guy” and a walrus. Just typing this paragraph makes me WANT TO RIP OPEN KEVIN SMITH’S ABDOMEN AND FILL IT WITH VHS COPIES OF DOGMA. Any currency this guy had with me after Red State has been totally fucking spent by Tusk, WITH INTEREST. Kevin Smith, who has basically already said “fuck you” to all aspiring filmmakers by making Clerks II and every other Kevin Smith movie, now adds a TEA BAG to that CURB STOMP by making Tusk, reminding all struggling directors what they WOULD BE FUCKING CAPABLE OF if they had just a little more money and a lot less talent. OH AND ALSO A FUCKING PODCAST.

My blood pressure is going up just writing about this piece of shit movie. UNLESS YOU ARE A HARDCORE KEVIN SMITH FAN (OMG) DO NOT SEE TUSK. And if you are in fact a Kevin Smith fan, please do the rest of us a fucking favor and drink a big tall glass of fucking suicide. The less said about it, the better. There is nothing good to say about this film OH WAIT A MINUTE. I take it back. Tusk taught me about the BACULUM, which is the penis bone AND ALSO THE NAME OF MY BLACK METAL BAND WHEN I MAKE ONE. Wait, someone beat me to it?

Shit I guess all the good ideas really are taken. So much for my metal career. Thanks for reading, motherfuckers. CHICK OUT!