Let’s face it: Hollywood is out of fucking ideas. They will make a movie based on a fucking Milton Bradley board game or a fourth-tier superhero named Vegetable Man before they come up with anything fucking original. BUT WHO CAN BLAME THEM? Just look at my Jupiter Ascending review. Whenever they try to actually do something original THEY GET SKY-SURFING SPACE WEREWOLVES. Here is a scene from my screenplay “Development Hell” WHICH I AM TOTALLY FUCKING MAKING INTO A MOVIE TOMORROW.

Jesus Christ I want to fucking kill myself.

Hang on! I’ve got it. Let’s just remake Doc Hollywood.

These days, MOVIE STUDIOS NEED TO ROLL WITH THE SHIT THAT WORKS. Or with something that worked in the past — like RoboCop from 1987! The only thing I remember about that fucking movie is that some guy melts his face in a vat of radioactive acid. My brother showed me that scene when I was a kid AND IT SCARED THE SHIT OUT OF ME FOR YEARS. To this day whenever I see a barrel or big trash can I GIVE THAT SHIT A WIDE FUCKING BERTH. Anyway, the original RoboCop was directed by Paul Verhoeven, a guy who has surprised audiences with his ability to inject witty satire into his sci-fi productions (Total Recall, Starship Troopers) along with his ability to make HORRIBLE FUCKING GARBAGE (Showgirls, Hollow Man). So I guess what I’m saying is that WHEN YOU GO TO THE PAUL VERHOEVEN WELL FOR YOUR REMAKE MATERIAL BETTER MAKE SURE YOU ARE GOING TO THE RIGHT FUCKING ONE. 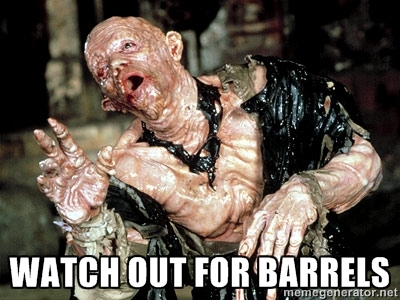 So anyway the original RoboCop was pretty good and at least Hollywood went to the right source for a remake. NICE WORK GUYS EVERYONE GETS RAISES. The story and concept of the new film, from what I can piece together from memory, is pretty much in line with the original movie. Detroit cop is undercover and in real fucking deep. He’s going to expose corruption that goes all the way up the goddamn food chain. As a result, he gets his ass killed and his wife and son are like, ALL SAD AND SHIT. Then a big mean corporation (OmniCorp LOL) swoops in and declares WE CAN SAVE YOUR HUSBAND’S LIFE BUT WE WILL TURN HIM INTO A ROBOT. Wife says, “Sure, sign me up for RoboSpouse. Make sure you give him A BIG FUCKING METAL COCK.” And the corporation is like, “Okay. Is the cock circumcised?”

This scenario, which takes place in the “near future” of 2028 TO MAKE IT MORE PLAUSIBLE, is actually a pretty fucking great set-up for a movie. It establishes a believable context in which a human/robot hybrid person might actually exist. The film even builds successfully on the premise by asking questions like:

And so on. These are very interesting questions, people! DEEP QUESTIONS. But here is the problem: WHAT THE FUCK ARE THEY DOING IN A MOVIE CALLED ROBOCOP?!?!?! 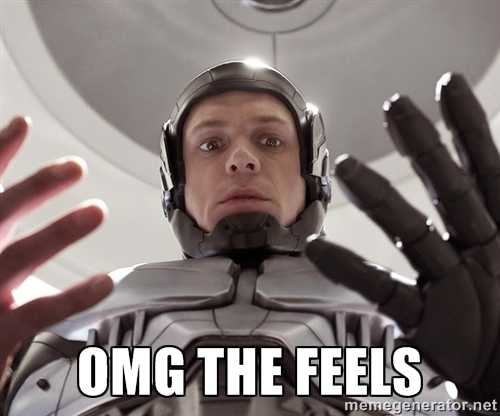 The movie is called ROBOCOP, not ANGSTYCOP. RoboCop (1987) was a crazy action movie with a dash of humorous commentary, but mostly IT WAS A CRAZY FUCKING ACTION MOVIE WITH MELTING PEOPLE AKA HUMOROUS COMMENTARY. RoboCop (2014), much to its detriment, WANTS IT BOTH FUCKING WAYS. It wants to be both a high-minded science-fiction parable AND a movie starring a ROBOT COP THAT SHOOTS MOTHERFUCKERS IN THE FACE. I can appreciate the ambition here but THIS IS A DELICATE FUCKING TIGHTROPE TO WALK, requiring a director with significantly more skill than Jose Padilha (the guy who directed this shit) to pull it off. Needless to say, RoboCop doesn’t make it very fucking far along the tightrope. RoboCop actually takes a few steps and starts to wobble. Then RoboCop falls on the fucking crowd, killing two, injuring three, and requiring a full refund for all attendees PLUS A FUCKING FREE BAG OF POPCORN on the way out. Everyone thinks popcorn is a cash cow but the FUCKING MARGINS ARE SLIM and you’d be surprised what the distributors are charging these days THOSE ASSHOLES. So THAT SHIT HURTS when RoboCop falls on you. BELIEVE IT.

Anyway the short version is that RoboCop is attempting a “chocolate in my peanut butter” approach, mashing up SMART SCIENCE FICTION with STUPID DUMB ACTION and only does a fair-to-middling job at either one. In fact there are only like three action scenes in the whole fucking movie and in most of them ROBOCOP JUST WALKS THE FUCK AROUND A DARK WAREHOUSE. Jesus fuck, we couldn’t even get A FUTURISTIC DARK WAREHOUSE? The action is really boring, up until the end, at which point it becomes CGI-heavy and fucking fake, but less boring. RoboCop whiffs on the action, but actually gets the sci-fi part better, due in large part to the strong cast. My man Jose was able to sign up a whole bunch of acting powerhouses here, not to mention a pretty good list of supporting players: Gary Oldman, Michael Keaton, Samuel L. Jackson, Jackie Earle Haley. Seriously, these guys FUCKING NAIL IT BECAUSE THEY ARE FUCKING PROS. They are such pros that they can hang with Omar from The Wire, who is the best actor of all time AND HIS NAME IS MICHAEL KENNETH WILLIAMS BUT HE WILL ALWAYS BE FUCKING OMAR TO ME. Even Jay Baruchel, in a small role as a marketing sleazebag, is awesome. You might forget for a minute that the movie is called RoboCop, which is about a ROBOT FUCKING COP, RIGHT? WHY ISN’T THERE MORE ROBOT COP ALL UP IN THIS BITCH SHOOTING GUYS IN THE FUCKING DICK?!?!?

For the record, here is RoboCop shooting guys in the fucking dick:

So I will tell you why RoboCop isn’t RoboCoppy enough: they cast a virtual unknown (Joel Kinnaman) in the title role, and he’s just not up to the task. Maybe THEY ACTUALLY WANTED ROBOTIC ACTING when casting a robot cop, but let me just tell you that THIS CREATIVE INSTINCT DID NOT PAN THE FUCK OUT THE WAY THEY WANTED. Joel Kinnaman — though not a bad actor, and quite possibly a GOOD ACTOR in his native Sweden — is simply unremarkable in every FUCKING WAY IMAGINABLE. He lends the hero little pathos, little humanity, and almost no badassery. Seriously, watch the beginning and TELL ME HE IS A GOOD FUCKING COP. He is a stupid, terrible cop! Why isn’t Omar AKA partner of RoboCop turning into RoboCop? NOW THAT IS SHIT I WOULD LIKE TO SEE BUT I AM TOO FUCKING LAZY TO PHOTOSHOP OMAR’S FACE ON ROBOCOP’S BODY.

Anyway poor Joel Kinnaman, in his defense he DOES HAVE some pretty steep acting challenges in this movie, like when he sees his body (such as it is) for the first fucking time after his accident: 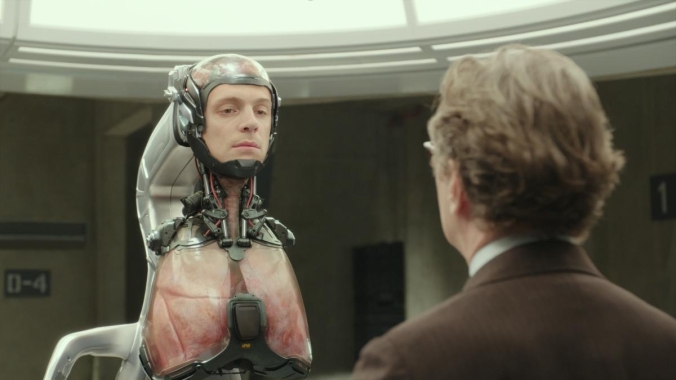 All I can say is: YIKES. They turn THAT into a fucking cop? FUCKING GROSS. Truth is that OmniCorp really missed an opportunity here. They should have licensed RoboCop to Vicks for LIKE A BILLION FUCKING DOLLARS because that shit is MASCOT MONEY, PLAYA. 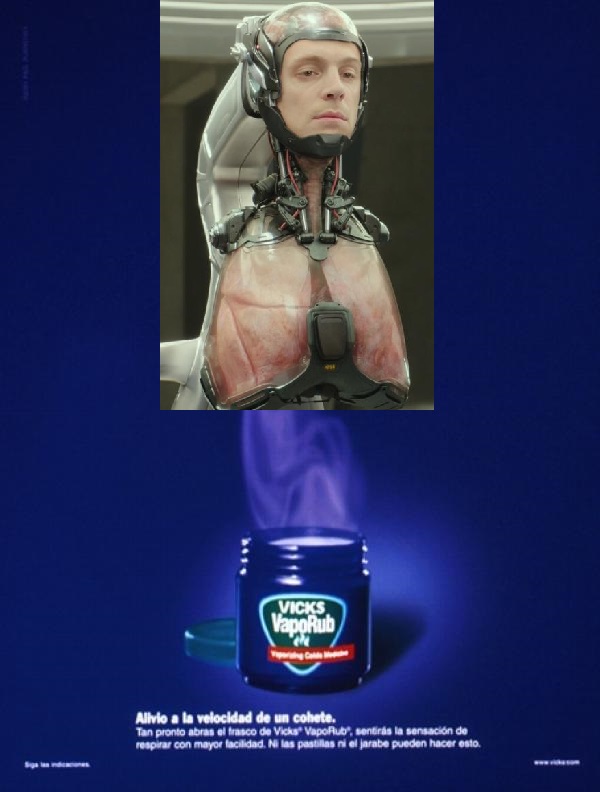 Vicks brought to you by VapoCop (TM)

So yeah poor Joel Kinnaman, he needs to be the heart of this movie BUT HE’S ONLY HEAD AND LUNGS LOL. Peter Weller totally held it down in the original movie but Kinnaman can’t do the same, so that duty is passed along to Gary Oldman. Good ol’ Gary Oldman, last seen yelling at CGI apes in Dawn of the Planet of the Apes is now yelling at CGI anatomical nightmares in RoboCop which is my way of saying GARY OLDMAN HAS COME A LONG FUCKING WAY SINCE BRAM STOKER’S DRACULA. Gary Oldman is legitimately great in this stupid fucking movie, he actually makes the whole enterprise of turning a person into a machine something loaded with scientific complexity and moral ambiguity. He’s almost a fucking genius until HE ORDERS THE ENTIRE DETROIT POLICE DATABASE UPLOADED TO ROBOCOP’S BRAIN LIKE 30 FUCKING SECONDS BEFORE HE IS GOING TO BE UNVEILED TO THE GENERAL PUBLIC AT A PRESS CONFERENCE. This is a gigantic asshole move and quite frankly the entire movie went out the fucking window for me at this point. Anyone who is not a fucking retarded idiot knows that the time to make drastic changes to your really fucking important presentation is NOT 30 FUCKING SECONDS BEFORE YOUR REALLY FUCKING IMPORTANT PRESENTATION.

Everyone, apparently, except Gary Fucking Oldman in RoboCop.

So as usual this movie is loaded with bullshit but it’s also a pretty good watch. You can see it on Netflix and Amazon Prime streaming right now, so NO MORE EXCUSES, YOU BIG PUSSY. My feeling about RoboCop is basically the same as my feeling about losing my virginity: WELL THAT SHIT COULD HAVE BEEN A LOT WORSE.