No, I didn’t fuck up my resolution. I know I created this blog like two weeks ago, and then I didn’t post shit. SO WHAT. No one is reading it yet. I just got back from class and realized I have a window of opportunity, so here we are. HAPPY NOW ASSHOLES?

Unless you are currently in an induced coma, someone you know has probably come up to you recently and said, “OH MY GOD HAVE YOU WATCHED BLACK MIRROR?” If you are not in a coma, you probably reply, “No. What the fuck is Black Mirror?” If you are not in a coma, but you are an asshole, you reply, “Yes it came out like five years ago on the BBC, where have you been?” Then you sigh heavily, roll your eyes, and go back to reading your anime graphic novel about homosexual pirates or whatever AND I PUNCH YOU IN THE FUCKING EAR FOR BEING A NERD FUCKTARD.

Anyway. At least one person in the last month has posted on your Facebook: “OMG. Mind, consider yourself blown.” And then a link to Black Mirror on Netflix. I know this to be the case. THIS IS REALLY HAPPENING. But in the event that you have not somehow heard of Black Mirror, let me describe this shit to you: Black Mirror is an anthology sci-fi/horror show, a la The Twilight Zone, that deals with the theme of how technology influences our lives today, mostly by imagining how technology MIGHT influence our lives in the not-too-distant future. AKA THIS SHIT IS TOPICAL. Some British guy was walking down the street all like, “Blimey, I spend more time texting me mates than actually meeting them for a pint. THIS WOULD MAKE A GREAT SHOW FOR THE TELLY!” Then he doffed his hat, said “Cheerio!” and flew off into the sky clutching an umbrella BECAUSE THAT IS WHAT THEY DO WHEN THEY MAKE SHOWS FOR THE BBC. “I’ve uploaded meself to the cloud wot wot!”

If you’re not an old person you may never have heard of The Twilight Zone. That is fine. I am here to guide you. One of the most famous Twilight Zone episodes was about an old guy who only wants to read books. That’s all he wants to do. Read fucking books. Want to go to the beach? NOPE, JUST BOOKS. Want a handjob? THANKS VERY MUCH BUT BOOKS ARE FINE. How about just a tickle? I FUCKING ALREADY TOLD YOU NOW LEAVE ME THE FUCK ALONE! Motherfucker loves his books, in other words. Then the apocalypse arrives. Then this happens:

I CALL BULLSHIT FOR SO MANY REASONS. First of all, HE STILL NEEDS TO EAT. If he doesn’t have any food or water, he will only be reading books for about the next 48 hours, and then only after that in EXTREME FUCKING DISCOMFORT. So okay, let’s assume he raids the grocery store and can eat for a good long time. Or forever. Doesn’t matter. Point is: there is a grocery store. And if there is a grocery store…then THERE IS A FUCKING LENSCRAFTERS. Just get another pair of glasses, asshole. Finally, he sat down funny on the steps and SUDDENLY HIS GLASSES FLY OFF AND SHATTER IN A MILLION FUCKING PIECES. What were glasses made of back then? Tissue paper? And also: fuck this guy, he can’t SIT DOWN ON STEPS without his glasses flying off his face like a fucking retard?

The Twilight Zone is old bullshit, in other words. Don’t worry about it.

Anyway, Black Mirror. It’s pretty cool. But check this out: there are only six episodes. “Oh, so it’s like a miniseries?” asks a reasonable fucking person. NOPE. Those six episodes are TWO SEASONS of Black Mirror. “Sorry, Guv!” says Black Mirror. “You’re daft if you think I’m doing more than three bloody episodes this season!” Well I say: FUCK YOU, BLACK MIRROR. You are barely one half of a season, so FUCK OFF. You are like the pimple on the tip of Law & Order‘s dick. You are six one-hour episodes, and you are FULL OF FUCKING SHIT. Please do not hand me a leaf of lettuce and tell me it is a club fucking sandwich. I WILL KILL YOU AND THE WHOLE MIRROR FAMILY.

Here is Black Mirror putting the finishing touches on a house.

So if you can get past the idea that six episodes are TWO SEASONS of this show (LOL) then you will probably enjoy yourself. All the episodes are pretty fucking interesting. AND YES I KNOW THERE IS A CHRISTMAS EPISODE STARRING DON DRAPER BUT IT IS NOT ON NETFLIX SO FUCK OFF. Here is a summary of the first six episodes of Black Mirror. SPOILER ALERT: THERE ARE NO MIRRORS.

Black Mirror is interesting and well-done, but like most things that idiots gush over, IT IS NOT THE BEST FUCKING THING EVER MADE. (That honor still goes to Dreamcatcher, starring the space worm that came out of Jason Lee’s asshole.) Each episode of Black Mirror feels like its own little mini-movie, which makes it an excellent choice for a quick watch here and there. If you binge-watch them all at once, probably the individual episodes will lose some of their impact. But: if you happen to be one of those people that has been wanting a show about old British dudes fucking farm animals THEN YOUR SHIP HAS FUCKING COME IN.

My name is Chick. I’m a freshman in college. I fucking love movies. This year, I made a resolution. Mostly I think New Year’s resolutions are fucking stupid. If you want to do something different or change your behavior, why do you need a special day to do that? Just do it. Or don’t. Picking a specific day to make a significant change is just setting yourself up for disaster. Not to mention that every other idiot is also trying to do the same bullshit. I am not special. But I will tell you something that I am also not: A FUCKING IDIOT. Unlike practically everyone else. It was this sentiment, this fucking CERTAINTY, that inspired my resolution: start a blog.

Not very original, I know. SO FUCKING WHAT, I didn’t tell you to come read this shit. Let me elaborate a little bit. We begin with Chick’s Law #1, which states: EVERYONE ELSE IS A FUCKING IDIOT. You may ask, “But Chick, where is your evidence for this notion of scientific certitude?” Allow me to present Exhibit 1A: THE ENTIRE FUCKING INTERNET. Yes, the Internet. (Which I learned is capitalized according to the AP Style Guide WOW YOU JUST LEARNED SOMETHING.) Arriving on the cusp of the 21st Century, the Internet heralded the arrival of a new age of connectivity, brought with it the promise of boundless information, AND GAVE US FUCKING CAT FAIL VIDEOS.

This one is my fucking favorite, by the way.

Pretty much everything online is created BY idiots, FOR idiots, or both. Discourse has devolved into a series of memes, catch phrases, and fucking pop culture references. Why? BECAUSE THE INTERNET THAT’S WHY LOLOLOL. 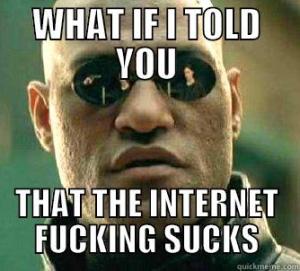 I will give you a relevant example: Uwe Boll. Everyone hates Uwe Fucking Boll. He is THE WORST DIRECTOR OF ALL TIME. He makes THE WORST MOVIES OF ALL TIME. He is an Internet punchline. He deserves to die. He should be butt raped by a gorilla. HIS MOTHER should be butt raped by the gorilla’s mother in a strap-on. HE IS THE WORST THE FUCKING WORST HE SHOULD BE DEAD!!! But do you know what Uwe Boll has to say to all of your shit?

Uwe Boll and his opinion of you.

I have watched most of his movies, and here is what I discovered: they are bad. BUT THEY ARE NOT THE WORST. Some of them are enjoyably bad, and some of them are just fucking bad. SO FUCKING WHAT. He makes a lot of them. I mean, like 2-3 movies per year. THE GUY IS A FUCKING WORKHORSE. I bet he works cheap, too. And returns a tidy sum to himself and his investors so he can go out and make more shitty movies. But guess what? HE IS DOING WHAT HE WANTS AND HE IS MAKING FUCKING MOVIES. What have you done, Internet? Sat on your stupid ass and spewed your stupid bullshit, as usual. WHO NEEDS TO BE ASS RAPED BY A GORILLA NOW LOL???

Well as of last year I had decided that I had reached my fucking Internet limit. I was supersaturated with stupidity. I had achieved CRITICAL FUCKING MASS. I mean it was actually affecting my life, my mood, my whole view of the world. “But Chick,” asked nobody, “what are you going to do about it?” So I was home over the holidays and I asked myself this very question. I thought about it so much I couldn’t fucking sleep. As I lay in the dark of my boyhood bedroom, staring up at the fucking ceiling, I realized two things that I really hate:

Please note that Item #1 and Item #2 are more or less the same thing, and I was not going to be an accomplice to either one. But then it hit me: YOU ARE PART OF THE SOLUTION OR YOU ARE PART OF THE PROBLEM. Yes, this is a fucking stupid cliche that moms post to their Facebooks.

Also: if you can dream it, you can do it.

However in this case IT HAPPENED TO BE FUCKING TRUE. Oh my God, I was in a panic. I think I had an actual panic attack, if I am being honest. LET’S GET REAL FOR A SECOND. To no longer be part of this aforementioned problem, I realized that I would need to delete my accounts, throw away my laptop, and only correspond via postcards and/or carrier pigeon. OBVIOUSLY THIS WAS NOT A REALISTIC SCENARIO. I am not a fucking idiot, remember?

So I decided that my 2015 New Year’s resolution was to start a blog. It took me a minute, but here it is. MY BLOG. Read it or don’t read it. YOU MADE IT THIS FAR WHY STOP NOW. My mission is to review movies and games and TV and shit and not be an idiot. Welcome…to the real world.